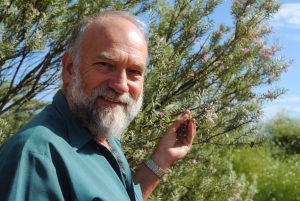 John is an experienced horticulturist with broad knowledge of ornamental horticulture in South Australia, particularly in the arid zone, and a passion for plants and gardening. Trained at the Botanic Gardens of Adelaide, worked at Leigh Creek as horticultural adviser and then moved to PNG as Curator of the National Botanic Garden of Papua New Guinea in Lae.

Returned to SA and established the Parks & Gardens Dept for the Port Augusta City Council.

Moved to Roxby Downs in 1987 to work as horticulturist and then senior environmental scientist. After 18 years in these roles moved to Adelaide and worked at Mount Lofty Botanic Garden, before accepting a lecturing position at TAFE SA Urrbrae Campus for 12 years until retirement in March 2018.

Venue: Plympton Community Centre, 34 Long Street, Plympton – 200 metres east of Marion Rd, and 300 metres north of Anzac Highway
Entry by donation (minimum of $2).
Bookings not required
Please bring supper to share, tea/coffee will be supplied.
Meetings should conclude by 8.30pm.
At the start of each meeting a ten minute presentation on a ‘Butterfly of the Month’ will be given by a BCSA committee member.