This butterfly is a migrant to South Australia.  Every few years there are immense migratory flights of adult butterflies sometimes with thousands of individuals, commencing in the north of the state and moving south to Adelaide, Mount Gambier and Kangaroo Island.  Locally common in breeding areas and during southern migrations.  In the northern breeding areas of South Australia, numbers of the butterfly tend to be more common about their foodplants during the warmer months.  Most of the migrating butterflies seen in South Australia probably have their origin from the inland areas of New South Wales and Queensland.

You can see Helen’s Wilmore’s photos of various stages of metamorphosis, with descriptions of each stage HERE

Both the fore and hind wings are white, edged with a wide-ish black band itself punctuated with an array of white variably shaped spots.

In males the band can be quite narrow but is usually considerably wider in the females, indeed in some females this band can occupy significant areas of the upper wing area.

As with many Pieridae butterflies it is the underside of the wings that sets the heart racing.  In males the upper forewing and lower forewing are similar, but the hind wing differs in having the veins thickly covered with black scales producing a number of variably shaped white areas edged black.  The terminal row of white spots have within them a deep yellow blotch.

In females the under part of the forewing is usually coloured  deep yellow, and the hindwing has a wide suffusion of black edging with little white area.  As in the male the terminal row of spots have deep yellow blotches within.

Capparis species including C. mitchellii (tree caper) (Capparaceae).  In central west New South Wales the foodplant is a broom like tree Apophyllum anomalum (Capparaceae), which does not occur in South Australia.  The larvae eat all the softer green parts of the foodplant and if that has been demolished then they will also eat the green bark off older twigs.

Within South Australia its foodplants have only been recorded to grow naturally in the northern Flinders Ranges and in the extreme northeast area of the state.  The foodplant in these locations is the tree caper, which occurs sparsely and is unlikely to produce the immense numbers of butterflies seen during the big migrations.  In the northern Flinders Ranges the plant tends to frequent the ravines and rocky areas.

Near its foodplant in northern pastoral areas it is possible to find the butterfly throughout the year.  In the southern settled areas it is most commonly seen in the spring and early summer during its main southerly migration.

There are no major threats to the butterflies within South Australia.  In western NSW and southwest Queensland, the butterfly breeds in the plague locust belt and it is likely that the locust controls have an influence on butterfly numbers.

The tree caper, the only larval foodplant of the butterfly to occur in South Australia, does not appear to be reproducing itself satisfactorily in S.A. due to the effects of past droughts and the grazing by animals.  An attempt should therefore be made to revegetate the tree in suitable areas.  It will require protection from both grazing animals and from the caterpillars of this butterfly while still in the immature thorny stage of growth.

Plants for attracting this butterfly to your garden 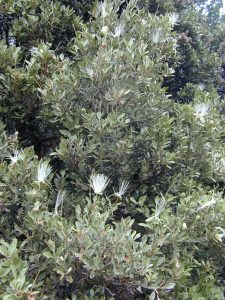 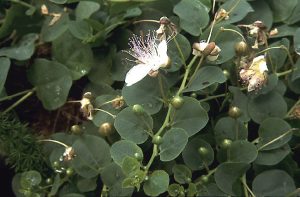